Mark Twain Tonight! is a one-man play devised by Hal Holbrook, depicting the celebrated author when he was on the lecture circuit with his social commentary - as relevant today as is it was more than 100 years ago.
When the calendar turned to 2014, it laid down a milestone for the longest running show in American Theatre history – the 60th year for Mark Twain Tonight! Clive Barnes of The New York Times reviewed Hal Holbrook’s third New York engagement in 1977: “Hilariously funny.” Holbrook has shown us Mark Twain the social critic, whom George Bernard Shaw called “America’s Voltaire.”
The show never stops evolving. “Mark Twain never stops surprising me,” says Holbrook. “He’s kept me fired up and asking questions most of my 90 years.” The New York Times: “Mr. Holbrook’s material is uproarious, his ability to hold an audience by acting is brilliant.” It was called “one of the treasures of the American Theatre” by Life Magazine.
"This is no museum piece – it is acting of the first order. From the moment Hal Holbrook steps on stage, you simply take for granted that Mark Twain himself is up there talking to you. To attempt so demanding a full evening tout de force is risky at any age, and I confess to wondering how well Mr. Holbrook would hold up under the strain. I rejoice to report that he is better than ever!”
- Terry Teachout, The Wall Street Journal 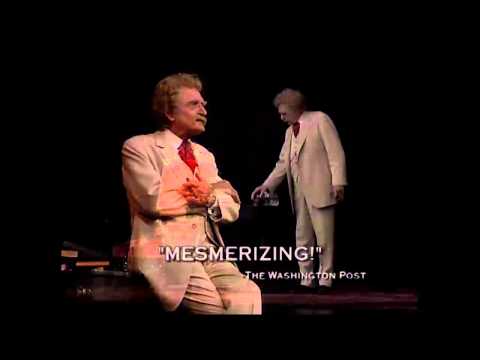