NATIONAL GEOGRAPHIC LIVE: VIEW FROM ABOVE

Step back, about 220 miles from Earth, and experience our planet from a new perspective. Gain a deeper understanding of our planet’s beauty, climate, and place in the universe from former International Space Station Commander Terry Virts, who took hours of video and hundreds of thousands of still images from the station’s 360-degree viewing module.

Sometimes, a little distance is all you need to see things in a brand new way. For astronaut Terry Virts, his newfound perspective was from the International Space Station (ISS), where he installed the Cupola module, granting an unprecedented 360-degree view from the station. When he later became the commander of the ISS, he made good use of the Cupola, taking more photographs than any astronaut who came before him. Many of those images were later used in the National Geographic book View From Above and IMAX film A Beautiful Planet, but to hear Virts tell it, no photo can capture the perfect shade of blue from a sunrise viewed from outer space.

Colonel (ret) Terry Virts served in the US Air Force as a fighter pilot, test pilot, and NASA astronaut. In February 2010, he made his first spaceflight as pilot of the Space Shuttle Endeavor during mission STS-130. His next launch was onboard the Russian Soyuz TMA-15M in November 2014 from Baikonur, Kazakhstan. Most recently, Virts served as commander of the International Space Station during 200 consecutive days in space—one of the longest continuous space missions of any NASA astronaut.

He recently directed his first film, One More Orbit—a full-length documentary chronicling the 2019 mission in which he broke the world record for any aircraft circumnavigating the planet over the North and South poles. Virts also appeared in the 2016 IMAX film A Beautiful Planet, a breathtaking portrait of Earth from space that features stunning footage—much of it shot by Virts while aboard (and outside) the International Space Station—of our magnificent blue planet, and humanity's impact on it.

Virts has taken more photos from space than any other astronaut. His photography, which provides incredible aerial views of Earth and the vast space that surrounds it, is featured in the National Geographic book View From Above, released in October 2017. His following book, How to Astronaut, was released in 2020.

Virts is a graduate of the US Air Force Academy, Embry-Riddle Aeronautical University, and Harvard Business School. As one of only four astronauts to have piloted a Space Shuttle, flown a Russian Soyuz spacecraft, performed space walks, and commanded the ISS, he has a unique perspective to share. 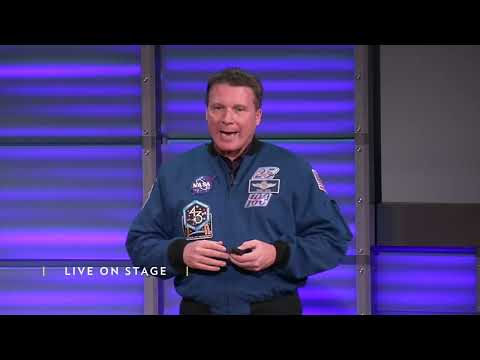 NATIONAL GEOGRAPHIC LIVE: VIEW FROM ABOVE